k International Haiku Poetry Day in Hobart, Ron Moss and I held a ginko in the Royal Botanical Gardens. We chose to meet at the site of the Japanese Gardens, where the haiku group Watersmeet had its beginnings. This was an opportunity, not only to celebrate the day, but also to bring together poets who may be interested in continuing to share haiku activities.

Fourteen people turned out to take part, some of them old hands at haiku, some relative beginners and some entirely new to the form but with a keen desire to learn more about it. We were honoured to also have the company of Lee Bentley, co-coordinator of the Bindii Japanese Poetry Genre Group, who was visiting from South Australia.

After a brief introduction where Ron and I read some mood-setting haiku and thoughts about haiku, Ron led the way along paths that wound through autumn-coloured foliage, across wooden paths and bridges spanning shimmering ponds.

At the sound of a bell we would stop to silently observe and reflect, until another bell signaled a move to another quiet space amid the garden’s various nooks and arbours.

we have to slow down 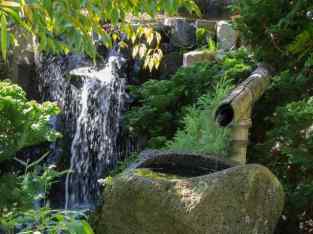 at rest above the waterfall her walking cane

After an hour or so of silent walking, observing and note-taking, we made our way to the fuchsia house where we shared our thoughts and poems and agreed to meet again for a mid-winter ginko in July. Lee read to us from the fine anthology Willow Light which she edited for Bindii, and gifted us with copies.

in the fuschia house

I had meant to take photos for this post, but being absorbed with pen and paper and the surrounds, I had to return the next day. This time I brought my husband, whose camera eye captured the images you see here. Fortunately the day was as glorious and sunny as it had been for our walk.

When I emailed for contributions of poems for this report I received the following from Irene McGuire – and share it here with you:

The weather couldn’t have been better and the Japanese maples were dong their best to remind us of the season. I had thought to bring my binos but forgot them in the event. At our first stop I could see a flock of small birds flitting. All I could be sure of was that they were not fantails or fairy wrens. The backlighting erases all colour as well and I am not that confident of recognising their calls.

from branch to branch

Tom noticed the trees reflecting the light from the pond as did many of us.

Another lovely gift received in answer to my call for haiku is this beautiful haiga by Ron:

This entry was posted in All posts and tagged haiku, Watersmeet. Bookmark the permalink.