Here I am reposting an article written for the Australian Haiku Society’s Featured Haiku Archive. I hope you enjoy it. 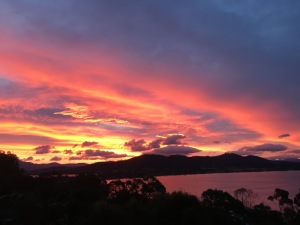 One of my earliest encounters with haiku written in English was in Balancing on Blue: a selection of poems and haiku from the 1991 New Zealand International Poetry Competition. Knight’s poem was the winner in the best individual haiku section, judged by Elizabeth Searle Lamb. In her judge’s report, Searle Lamb describes the elements she was looking for in choosing the winning haiku:

I looked for evidence of an understanding of the inner spirit, the essence of haiku; for technical skill, for fine tuning of each line, for apt word use, for freedom from padding…Then, even more difficult, came an assessment of originality of concept and vividness of concrete images, and an evaluation of intangibles—the spirit, the rhythmic flow, the rightness of every element making up the individual haiku.

How vivid is the imagery in this poem! The words impart a sense of being immersed in a sky rippled and ribbed with rows of thick, fluffy white clouds, that gradually change colour as sunset approaches. This long moment of “wool-gathering,” where the surroundings disappear and only the mutable pattern of clouds exists, is brought to a close by the calling of wild geese.

The poem is rich with visual and auditory sensations. It holds a strong sense of mono no aware, the pathos of things and the awareness of the transience of life as the day, with its changing patterns and colours, comes to a close.

A mackerel sky is thought to augur a change in conditions, sometimes as a precursor to rain, sometimes to finer weather. Here the change is from day to night as the crimson sky darkens. And something more…

John Knight ‘s collection big man catching a small wave, published in 2006, opens with ‘mackerel sky’. At that time he had been fighting cancer for three years. In the book’s acknowledgements John refers to this haiku as “my haiku of departure”.

This reference gives added poignancy to the haiku and opens up a deeper level of interpretation, the “intangibles” at which the words hint.

In some cultures wild geese are associated with the spirit. The use of this symbol evokes a sense of freedom and release, of homecoming. Whether that message is intended by the poet or not, it shows the power of images to call up associations, memories and emotions that connect us through the recognition of our common humanity and the journey we share.

John Knight died in 2012. You can read about his contribution to Australian haiku here.

Balancing on Blue: a selection of poems and haiku from the 1991 New Zealand International Poetry Competition /Sewell, B and Stace, J(eds) Wellington, New Zealand : NZPS, 1991

This entry was posted in All posts, haiku and tagged John Knight. Bookmark the permalink.