With open eyes and hearts 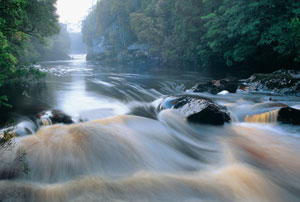 While cleaning up files on my computer I came across and reread Martin Hawes’s reflections on the little book Watersmeet: haiku when he launched it at the Hobart Bookshop in 2005. As well as commenting on the book, Martin spoke insightfully on haiku and on the place of nature in our lives.

The following, slightly modified, version of his speech was first published in Famous Reporter #31

I’d like to begin by sharing two experiences. The first happened many years ago. I was sitting on the shore of a lake in the Southwest, a lowland lake surrounded by rainforest. And I heard a bird. To this day I don’t know what sort of bird it was, but at the time I was convinced it was a young bird calling for its parents. There was something about the urgency and desperation of its call. The voice of that bird was the voice of every sentient being that finds itself alone and apparently abandoned in a strange and uncaring universe.
The second experience happened about a week ago, when I was driving down the Brooker Highway on my way home from another trip in the bush. Hobart’s not bad as cities go…but when you’ve just spent several days in wilderness and are driving down the Brooker Highway, the phrase ‘descent into hell’ does spring to mind! There were trucks and billboards and powerlines and traffic lights. There were liquor stores and machinery yards. The sky was grey.
My mind must have been casting around for some kind of relief, some sign of hope, when I found myself approaching an overpass. A young woman was walking across it – probably she was only a teenager. At the moment I looked up at her, the wind caught her hair and sent it out it a flowing stream. Several thoughts went through my head. One of them was whether a man of my age ought to be eyeing off young women! I thought of the innumerable images of flowing hair that have been exploited in Sunsilk advertisements and fashion magazines. I marvelled at the fact that human beings are near-naked apes, yet the hair that remains to us can be wondrously decorative. All this and more flashed through my mind. Yet neither the chattering of my mind, nor the 10,000 Sunsilk advertisements, could alter the fact that there on that bridge, in the midst of all the drabness and traffic, something of great beauty had just taken place.
When I was invited to give this talk I began thinking about what I’d say, and these experiences came to mind. It occurred to me that they were what might be called ‘haiku moments’. They were not the sort of experiences you’d normally write home about. They were not ‘enlightenment’ in the ultimate sense of the word – if there is such a thing as enlightenment. They were, nevertheless, awakenings of a sort; they were moments in which the deeper nature of things is revealed, when one is reminded of the beauty and mystery that lie just beneath the surface of the seemingly mundane.
My hunch that they were ‘haiku moments’ was confirmed while I was researching what I would say in this talk. (I don’t know much about haiku, and I didn’t want to sound completely ignorant.) While surfing the internet I came across the following two haiku by the 17th century Japanese poet Basho, who has been described as the ‘Father of haiku’: 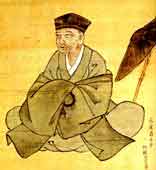 the depth of loneliness,

bamboo leaves, with one finger

she tidies her hair

How sensuous those dumplings are!

What is it that’s special about haiku? Indeed, what are haiku? It’s been said that no other form of literature has so many rules. I found one website listing over 50 rules, some of them mutually contradictory! No one can say for certain what a haiku is because the form is constantly evolving and none of the rules are unbreakable. Nevertheless, one thing we can all agree on is that haiku are short! And one of the golden rules of writing is that the shorter a piece is, the harder it is to write. To convey a scene or an idea in a few short sentences demands great skill and maturity. The skill lies not just in the choice of words, but in choosing what to leave unsaid. Behind the best haiku are whole realms of experience, whole lifetimes of patient observation.

Haiku generally deal with everyday things – birds, dumplings, the moon, the wind. Yet they reveal these things to be mysterious and extraordinary. Haiku also tend to be contemplative and reflective – that is, the insights they contain and the experiences they describe are the fruits not of judgment but of quiet observation, not of self-seeking effort but of humble acceptance.

So haiku represent a dissenting voice to the prevailing ethos of our time. We live in a world where material values are all-important, where the emphasis is on sensation and endless acquisition, where appreciation of simple things is not only neglected but despised as a hindrance to economic progress. Ours is a world where dumplings are commodities and images of beautiful hair are used to boost sales. In a quiet and unassuming way, haiku take a stand against this world and suggest a different way of living.

So personally I felt very heartened when I was given a copy of Watersmeet: haiku. It’s a tribute to the Watersmeet Group and to the 11 poets whose works are represented in the book. It’s also a tribute to Pardalote Press, and in particular to Lyn Reeves who founded Pardalote. It’s a beautiful book and it contains many gems – allow me to quote just four of them.

What an exquisite haiku! In two short lines we are taken out to sea, then brought back to the shore and the dinghy’s final resting place.

For me this conjures an image of a hallway in a Federation house, perhaps a bit musty. And here’s this hakea pod that’s been sitting on a table somewhere, cut off from the natural world, probably forgotten – yet all these years the miracle of life has been waiting inside it, waiting to burst out. It reminds us of the resilience of nature and of the way hope can endure against the odds.

(Christina Kirkpatrick)
I can’t add a single word to this poem! Like the heron, it stands alone and complete.

(John Ward)
For me, these few lines encapsulate so much about Tasmania. Here is the glossy tourist image of green fields and apple orchards – and here are the bushfires, probably lit by Forestry Tasmania, that symbolise the bleak reality of what’s happening to our environment. Even the word ‘smudged’ suggests that the pretty picture is being clumsily and irreparably damaged. Of course, that’s only my interpretation; another reader might see the bushfires as part of the natural cycle of things. The haiku’s strength lies in its use of the phrase ‘apple blush’ to evoke both the pretty picture and the darker side of Tasmanian life.
I’d like to tell you one more story. A few years ago I was in Japan, in a place far away from the tourist circuit. I was walking along a road in the mountains when I came upon a small shop. The young man in the shop was delighted to see me – probably he saw very few Westerners – and he was eager to have a conversation. This was difficult, as I knew almost no Japanese and he had very limited English. Nevertheless, he somehow managed to convey to me his great love of modern Western culture. He even sang me the first verse of John Lennon’s ‘Imagine’ in faultless English. After a while he made it clear that he wanted me to follow him. We went outside and got into his car. I had no idea where we were going – for all I knew he was going to cut my throat! As a traveller one acquires a certain recklessness! We drove for several kilometres before he pulled up at the base of a small hill. We climbed the slope, and there on the hilltop was the objective of our journey – a shrine to Basho.
I found out later that Basho was something of an outsider and nonconformist: he lived in a hut and spent much of his life on long journeys walking across the Japanese countryside. It must have been difficult to be a nonconformist in 17th century Japan. Yet in his own day Basho was revered as a poet, and over 300 years later there are probably shrines to him all over the country. It’s a sign of the appreciation that people have for the insights he expressed in his haiku. Perhaps, 300 years from now, there will be shrines to the Watersmeet Group. 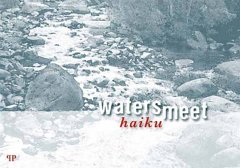 The introduction to Watersmeet: haiku includes the sentence: Reading and writing haiku develops a keener awareness of the world and of the value of everything in it. Our world needs more of that awareness. We could all do with more haiku moments in our lives. We can discover those moments if we can learn to live simply, sit quietly and walk with open eyes and hearts.
Buy this book and give copies to your friends. It reminds us that, as Basho said, ‘Every day is a journey, and the journey itself is home’.

Watersmeet: haiku is published by Pardalote Press. Haiga inspired by some of the poems were created by Hunter Island Press and are available from their website.