The following haibun was recently published in paper wasp haiku journal. I‘m posting it here with photographs of the time spent at Yudanaka walking the Issa Nature Trail.

Yamato-san greets us at the train station, energetically loads our luggage into his white van, and delivers us to his ryokan, the traditional Japanese guest house where we will spend the next few days.

We have left behind the full-blown cherry blossoms of Kyoto and Tokyo for the onsen town of Yudanaka in Nagana Prefecture. Here, spring is just beginning and snow-covered mountains press against steel blue skies. 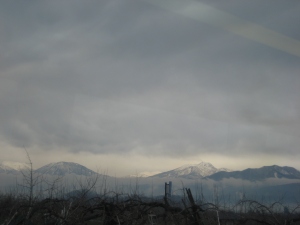 I know that this town houses the Issa Memorial Museum and am delighted to find it is right next door to our ryokan. Yamato-san is, in turn, delighted with my interest in haiku, though sceptical about whether a westerner can really understand, let alone compose, what he calls Haik! He has the keys to the museum and gives me a guided tour of the centuries’ old manuscripts kept here. 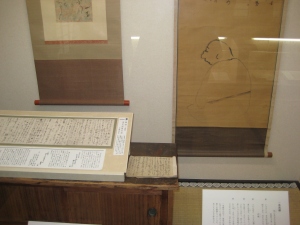 He tells me that when Issa came back to spend the last years of his life in the region where he was born, he famously wrote:

well here it is

beneath five feet of snow

Yamato-san directs us to the Issa Nature Trail on the ridge around the village. We set out through narrow streets beneath which the hot spring waters are gurgling. Steam escapes from grates in the gutters and hot water trickles from bamboo pipes into stone basins outside the doorways.

The trail winds through tall forest. Scattered along it are boulders inscribed with Issa’s haiku, rough and worn now. 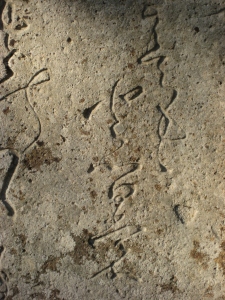 More recently wooden posts with the poems painted on them have been placed at intervals at the edge of the path. Last autumn’s leaves lie in brown mats beneath the melting snow. Issa spent much of his time wandering these hills. Though I can’t read the inscriptions, I feel the great poet’s presence.

the footfalls of Issa?

The morning we leave I want to give Yamato-san a gift. On one of the rice-paper breakfast napkins, delicately decorated with sprigs of cherry blossom, I write:

Ah – season word! He exclaims with pleasure, giving my haik his approval.